Is it me? or has information security completely changed? Give you a bit of a background - I live, breath, eat and sleep computer security. I'm not one of those"masturbating monkeys" as Linus puts it (I was gonna write this blog post, before Marcel told me about his rant about security guys).

I do; Intrusion Detection, Protocol Analysis, Threat and Risk Management - I also do digital forensics etc. I get my hands dirty where ever I can. I'm not one to point out an issue, and say fix it - I prefer to get in there and work with the people in the know to fix the issue as well.

I commend Dan Kaminsky for the epic work done on the DNS flaw - I only wish I had of sent that email to him the 2nd day after the biggest co-ordinated patch release in history. I had almost nailed the issue.

But, that's not what this rant is about. I remember a day when security people were feared - if someone from IS was coming, it probably meant something you were doing was wrong - and you hoped they passed your desk onto someone else's. Now a days it almost seems as tho security is a joke. No back swing for me - I can just sit there and yell - "Somethings wrong!" till I'm blue in the face.. or say "hey, I gotta do this to make sure your safe". Even if there is no impact, no requirements, no nothing - We still get hassled about what we need to do.

Then - it seems as tho, it must be the next big carer boom - the market is flooded with these so called CISSP certified IS professionals. I can't stand them - I'm sure most of them can't even tell the difference between TCP and UDP. Let alone the fact that IPSec is a protocol just like tcp/upd/icmp/gre etc etc etc.

I'd like to see them figure out a routing issue that causes information leakage - or why an IDS can only see half a conversation. Arg.

Don't get me wrong - security needs to change from the police and fire to an EMS type job. Don't be there to police and put out fires. But be there before things happen making sure everyone is safe -- and when something does happen know how to deal with that, and the cleanup afterwards.

For those of you in IT - listen to you security people - not all of them want to stop you from doing things - just keep you safe. A good security person will not only tell you it's not safe - but help solve and make it safe - or at least explain why it's not safe and why there is no alternative.

Good luck, and don't play in the street - try the back yard as an alternative ;)

Lunches, I spend a little time on youtube - just to see whats new.

Seems the muppets are trying to make a come back or something;

Ok - So I've noticed twitter was not on my IM anymore. I regularly post via my gmail account on my rim. I didn't think much of this.

Marcel sent me an invite to plurk, and some posts on his lug-nuts list showed signs of twitter problems, so I decided to go over to the site to see what's what.

Seems they've been having issues for a while - I started off my journey to a "we're down" page. But! The blog is up, so I mossy on over there to see what's what.

I found the entry:  It's Not Rocket Science, But It's Our Work  - Here we have a link to the infamous status page. We also have some Q/A which yielded:

Q: Is it true that you only have a single master MySQL server running replication to two slaves, and the architecture doesn’t auto-switch to a hot backup when the master goes down?
A: We currently use one database for writes with multiple slaves for read queries. As many know, replication of MySQL is no easy task, so we've brought in MySQL experts to help us with that immediately. We've also ordered new machines and failover infrastructure to handle emergencies.

Ok, Their having problems, according to the site. Maybe I can help them out, over to the jobs page and their looking for a Systems Eng:
Read more ...

Looks like this missed a few radars: Google and O'Reilly will be doing the Open Source Awards again this year at OSCON 2008.

The nomination process is open to the entire open source community, closing May 15th, 2008. Send your nominations to osawards AT oreilly DOT com. Nominations should include the name of the recipient, any associated project/org, suggested title for the award ("Best Hacker", "Best Community Builder", etc.), and a description of why you are nominating the individual. Google and O'Reilly employees cannot be nominated. 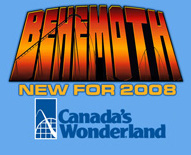 This past weekend I had the opportunity to visit Canada's Wonderland on a Special Family Day access before the park opened for the year. As you all know, I have a baby girl so most of my time was spent in Hannah Barbara Land - Which I wouldn't have missed for the world. The look on her face as she and Daddy went around the area in Chopper Chase was the best thing in the world!

I did however get the chance to ride the new ride for this year - The Behemoth!

Vaughan, Ontario, 2007 - Canada's Wonderland prepares to change the landscape for thrill seekers in 2008, with the addition of Canada's Biggest, Fastest and Tallest roller coaster - Behemoth. Following 18 months of planning and construction, Behemoth will premiere at Canada’s Wonderland in May 2008.

At over 5,300 feet (1,616m) in length, Behemoth sets the stage for thrills with a climb to a height of 230 feet (70.1m), followed by an adrenaline pumping 75 degree drop with speeds reaching 125 kilometers per hour in 3.9 seconds. The coaster will then take riders through the ultimate coaster experience with high speed twists and turns, including double banked flat loops (horizontal loops) and eight extreme drops. Intensifying the action packed adventure, the ride will feature prototype open-air seating that will allow all riders to experience an unobstructed view of all the thrills and excitement on one of North America's best coasters.

"Behemoth will be the biggest investment in Canada's Wonderland's 27 year history at approximately $26 million dollars," said Raffi Kaprelyan, Vice President and General Manager, Canada’s Wonderland. "With the addition of Behemoth, we wanted to compliment our already impressive line-up of more than 200 rides, shows and attractions with a world class roller coaster that will showcase Wonderland as one of the premier amusement parks in our industry."

I for one, as my twitter stated right after I got off the ride was not impressed. (Kinda reminds me of the description of Earth in the Hitch Hikers Guide to the Galaxy: Mostly Harmless)

Any true fan of Roller Coasters will enjoy an old fashion run on any wooden Coaster. This does not fit the bill. On the old school rides, you never knew how much give the wood would provide, and the ride was different every time. The clacking of the wheels on the rails, the random bumps and jolts are a hundred times more exhilarating then this new ride.

This ride, in it's approximately 3 min length starts with a 70 meter climb to drop you down it's first hill at 125 KM/H. After that, you have a few hills, then a curve, a few more hills then the last little bit of filler to get up the the time. All the time, it is as smooth as a baby's butt. The only real entertaining thing is the weightlessness going over the hills - which to me those are cheep thrills.

Over all, it's not a bad ride - just not the same excitement level. Go try it for you self - then go over to the Wild Beast, or The Great Canadian Mine Buster, and see the difference your self.